The Mola Museum intends to render visible the uses of the molas, an ancestral practice of traditional fabrics of the Gunadul indigenous people of Panama and Colombia. The curatorial concept of the Mola Museum is to exhibit the molas as objects with aesthetic values based on the  cosmogony. Through this approach, molas acquire particular relevance as cultural confections: not only do they deal with the traditional costumes and clothing of Gunadul women, but they transcend their utilitarian function to become works worthy of contemplation and reminders of the need to safeguard and promote the heritage expressions of humanity. 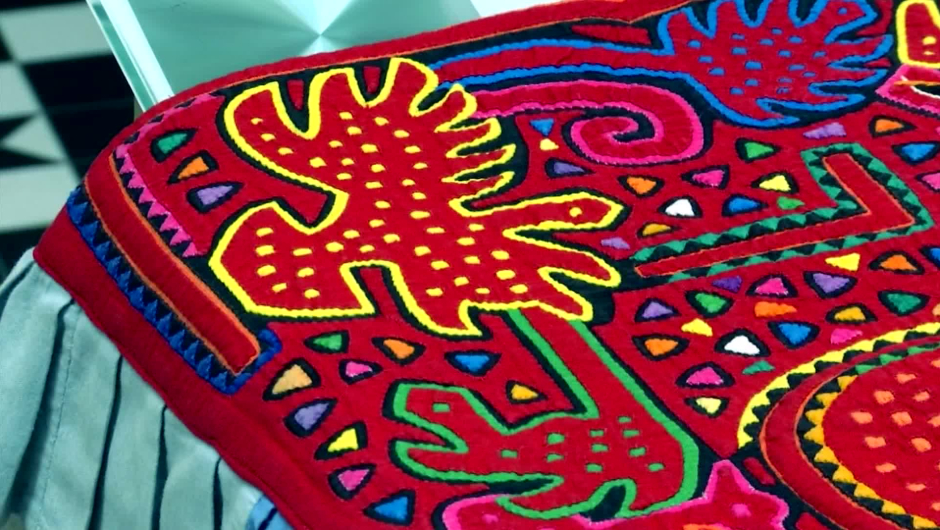 It is a scene that repeats itself over and over again. Tourists who visit the old quarter of Panama City are captivated by seeing colorful canvases in the stalls selling handicrafts.

They are the popular “molas”, an indigenous textile art that identifies the Guna culture of Panama and Colombia, whose origin comes from women´s practice of painting their bodies with geometric figures.

Since December 1, the tradition of working multicolored layers fabric with stitches achieved with very short and thin needles, has its own space: the MUMO or Mola Museum in Panama.

The permanent exhibition is an idea of the Alberto Motta Foundation, dedicated to promoting education and culture in the country.

The museum’s director, Javel Altamirano, told CNN about the friendship of the missing Panamanian businessman Alberto Motta with the Spanish philanthropist José Félix Llopis, also deceased. The latter, loved art to the extent that he collected some 577 molas throughout his life.

Altamirano says that it was not until a trip to Oaxaca, México, in 2017, when the businessman Stanley Motta, Alberto’s son, visited a textile museum and remembered the Molas of Llopis. At that moment, the idea of opening the MUMO was born and in Madrid he contacted Patricia Llopis, the niece who inherited the pieces and who made them available.

The director tells us that when the art collector David de Castro knew about the initiative, he wanted to join in.

The exhibition is made by 182 pieces, some elaborated since the 1950s, and is divided in five thematic rooms: “texture and evolution”, “worldview”, “environment or figurative”, “deconstructed or layered molas” and “narrative molas”.

Altamirano explained that, as the Mola has its own intellectual property, the opening of the museum was done with the support of five Guna congresses in Panama with whom an agreement was signed.

“The MUMO is a gift that is made to Panamanian people and tourists so that they can live that experience.

Contemplate, reflect and admire that art … Each layer of fabric tells a story, like any highly valued piece”, said Altamirano, who explained that the preparation of each piece takes between three and eight months. Its quality and price depends on that amount of layers the fabric has. The simplest has two.

The Colombian Mayby Ríos was tasked with curating the MUMO. Ríos explained that the preparation of the Mola is a technique that superimposes layers of colorful fabrics that entails a high degree of concentration, constancy and persistence.

“One of the primordial attributes is how Guna women reach that level of detail, elaboration and preciousness to achieve perfect, firm lines, which are made without rule, without meter, without iron … In the most basic conditions for producing an impressive work”, narrated the curator.

Normally, the Gunas use the Molas to place them in the chest area of their dresses that, little by little and like fashion, is evolving.

“The Mola is increasingly occupying the torso and fits the body to show more feminine forms. The purpose of the Molas is to distract and confuse the ‘entities’ that can attack women. It has a meaning of protection”, explained Rios, about this indigenous cultural work, one of the most enjoyed by visitors in Panama and of which from now on visitors will have the opportunity to get to know in depth at the Mola Museum.